The Twilight of Labor

Matt Bruenig has compiled a dataset of strike activity, which shows how perniciously inactive the trade unions have become in the United States, fact which if not surprising is worth repeating frequently. Cloven from the context this dataset cannot be appraised correctly however. You could imagine a situation where employees are consonant with their employers on all the important issues and do not feel the need to strike. Then the lack of strike activity would be beneficial both to the employees and their employers. In fact lack of strike activity is, in principle, a good thing. Strikes are disruptive and rendering the economy palpably weaker. A lack of strikes may be a calamitous occurence only if the reasons for it are reprobate or if it leads to fetid results. The problem is that we don’t always clearly know, and can’t easily find out either, what the interdependencies between these reasons and results are. 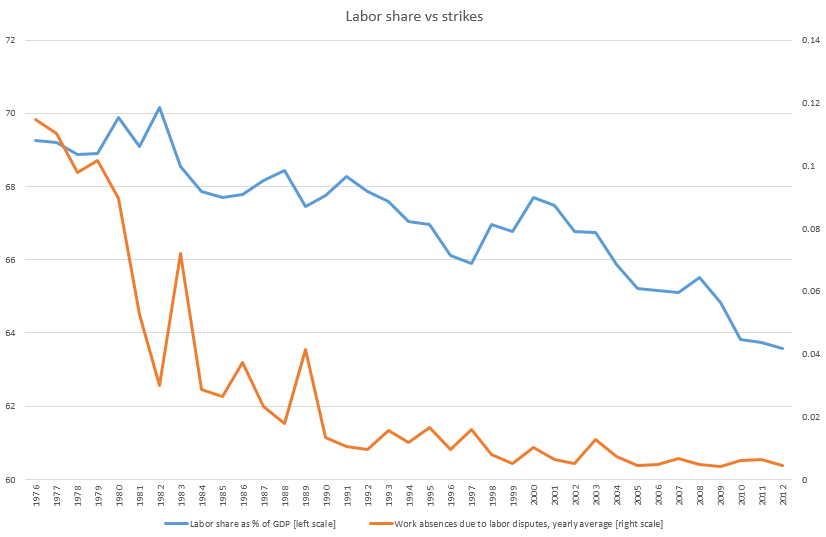 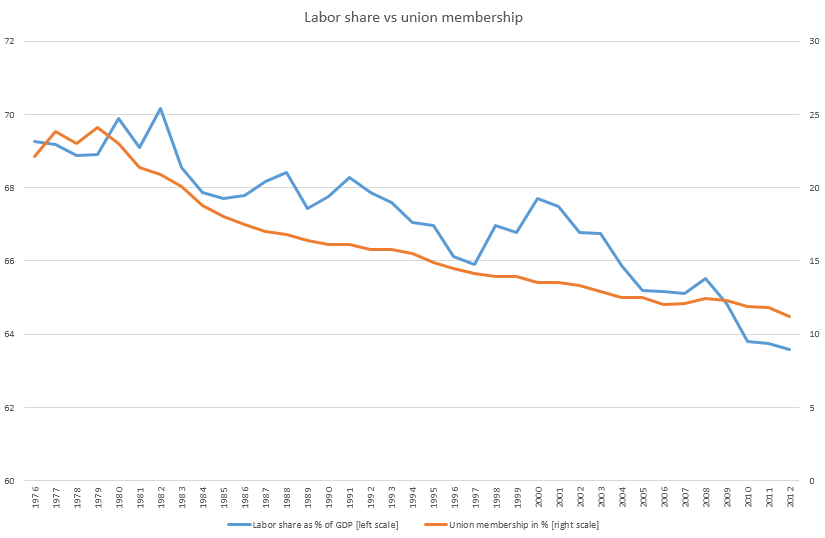 The relationship between the division of income between capital and labour and trade union activities shows clearly that torpor is a dire sign for the working class. Not only that but probably a bad sign for the economy as a whole. The growing absurdity of the division of wealth in America, which made news the last few years with notable regularity, may very well not be repairable by movements such as Occupy Wall Street, which despite being a hopeful sign, protests greed which is a natural instinct of corporations, and as such not negotiable, but does very little to elicit mutiny in the working class. And only by workers organizing themselves again, against such greed in their employers, and against such greed in the large society by influencing politics also, can the problem be rectified. It seems to be sine qua non of, if not a social democracy, them a democracy that isn’t asocial.

It may also be interesting to consider why the politicians (and a chunk of the media), especially on the right, don’t inform people of these relationships. It may be useful to quote a fragment of Slavoj Zizek’s work (surprisingly on Kieslowski’s movies) ‘The Fright of Real Tears’:

“The stakes of this debate are much higher than may appear. Until recently, a standard opposition between the conservative, moralistic Right and the enlightened Left was that the Right insisted on the necessity of maintaining (proper) appearances: even if we know that we all have our dirty secrets, it is crucial to sustain the sacred dignity of power by not probing too much into these secrets… This attitude was elaborated already by Pascal, not to mention Romantic conservatives a la Chateaubriand, who acknowledged that, at the origin of the existing legal order, there always lurks the horror of some unspeakable crime – for that reason, one should not dig to deeply into it, since this scrutiny may undermine the charisma of power and thus ultimately entail the disintegration of the entire social edifice. Against this conservative stance of ‘appearances matter’, standard leftist radicalism advocated the thorough scrutiny of ‘secrets best left in shadow’: is not the basic thesis of Freud that the uncompromising analysis of the libidinal foundations of morality will, far from undermining the stability of the social edifice, exert a liberating effect? The public radio discussion between Theodor Adorno and Helmut Schelsky in the late 50s is here exemplary: Adorno sustained the emancipatory potential of radical démystification, while Schelsky claimed that the vast majority of ordinary people cannot endure the radical démystification of their existence, and need a comforting lie, a semblance of stability and authority.”

And indeed the conservatives try to sustain power in an increasingly diverse and liberal country by keeping things in the dark (hence the bubble noticed by Bill Maher or Paul Krugman). And so when Louisiana Gov. Bobby Jindal tells GOP to ‘stop being the stupid party’ he doesn’t understand that the premise of the Right is to shelter people, including to an extent the politicians themselves, from knowledge of the intricate workings of the economy and the society. This is not surprising, what’s surprising is that the Democratic politicians don’t do enough to make sure people understand what their choices entail, which would make them not only better off, but probably voting for the left wing too.