In a recent New York Times piece called ‘Rise of the Robots’ Paul Krugman, a Nobel Prize laureate in economics, writes about the ‘shift [in] the distribution of income away from workers to the owners of capital.’ He further says that ‘our eyes have been averted from the capital/labor dimension of inequality.’ Krugman is indeed correct to notice this and to say that ‘if you want to understand what’s happening to income distribution in the 21st century economy, you need to stop talking so much about skills, and start talking much more about profits and who owns the capital.’ This constitutes an interesting comeback of the class struggle, as Marx saw it, in the mainstream media, but the problem with Krugman’s pieces on the topic is that he doesn’t understand and explain the issue, and merely points it out. While it is crucial to see what changed in the global economy from the 1980s, it is even more important to understand the processes behind it, which can yield understanding not only behind the income and wealth inequality but also the ubiquity of financial and economic crises and the rationale behind Occupy Wall Street movement, which is not, as yet, readily apparent. 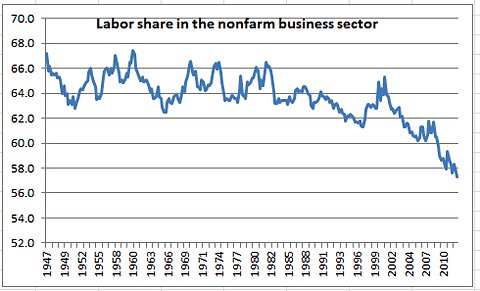 The chart above, presented by Krugman, only shows a small part of the story. In reality the problem is much deeper and the chart (basically showing inverse value of labor productivity) is only one of its manifestations. There are two main problems, one of which is methodological, while the other has a practical nature. Let’s start with the methodology of economics. It’s not true, as Philip Mirowski would want you to believe, that economics took too much out of physics (although there are many influences), in practice the situation is precisely the reverse: economics does not acknowledge the most important laws of physics, which, if governing all of the natural phenomena, are governing the economic phenomena also. In particular I’m referring to the first law of thermodynamics, or the conservation of energy. In economics the capital is equivalent to the concept of energy in physics. Therefore capital (wealth) cannot be created ex nihilo, as central banks are trying to do according to their will by printing money for no apparent reason, with the blessing of the mainstream economics. This is illusory, we know wealth cannot be created out of nothing, as if it was otherwise people would do it and everyone would prosper, which is ostensibly not the case. Economists are just now starting to grasp this concept and its implications, M. Dobija being one of the examples.

The practical side of the problem is allowed by the methodological problem in the economics described above, but is more complex. The mechanism of creating money out of nothing (called by D. Sornette and P. Cauwels, who are among the first to see the practical side of the issue (even if not fully), a perpetual money machine) allowed unscientific and wicked processes into the economy. As Krugman stressed ‘it has echoes of old-fashioned Marxism,’ because the class struggle appears to be between what Marx called labour and capital. The struggle is very simple, the capital is trying to own as big part of the global wealth as possible. The extent to which capital can own the wealth had a natural limit, after all the people forming the labour class had to have bare necessities to continue their existence in a peaceful manner. The capital, approaching this natural limit, have made a great invention of fiat money, which was allowed by the termination of the link between money and gold (not an inherently bad thing), that is the termination of the Bretton Woods system in the 1970s.

As can be seen on the above chart the limitless fiat money together with the deregulation of financial markets have created an economy in which the growth is not linked to productivity and wages any more. This, in turn, allowed the capital class to bypass the natural limit I’ve talked about. The consumption is no longer paid for with wages, it is paid for with debt. This is the whole ingenious idea, the labor class is allowed to use everything which keeps them from revolting against the capital, but they no longer own it, it is paid for with debt, and therefore ultimately owned by capital. That holds true for consumer credits paying for everyday necessities as well as the booming national debts paying for infrastructure (yes, the roads you’re using are owned by the capital through the debt too). Since the 1980s the capital owns everything (even some of the potential future wealth), and people do not yet see the trick, and only some of its manifestations.

That’s not the only problem this turn in the global economy has brought. The unscientific nature of the disconnection between the economic growth and the productivity growth means that the economy as a whole is becoming increasingly unstable, and hence the crises that are constantly shaking the economy since the early 1980s (great crash of 19 October 1987, the savings and loans crisis of the 1980s, 1991 burst of the Japanese real estate and stock market, the emerging markets crashes in 1994 and 1997, the LTCM crisis of 1998, the dotcom bubble in 2000, the house price bubble, and the crisis of 2008). Interestingly, the instability of the economics is one of the reasons which leads some economists to look at the problem and see the root causes of it. So it may be that the whole scheme will eventually collapse unto itself, with the excessive greed turning the participants of the system against it. But for now we need to have more economists understand this issue, deeper than Paul Krugman does, and then educate the masses so that movements such as Occupy Wall Street have a real meaning behind them, and not just vague slogans about social injustice.