By Paweł Fiedor On October 24, 2010 · Add Comment · In Knowledge Management

Philosophers have been pondering the following question since antiquity: What is knowledge? It seems as if a definite answer is yet to be found. This deadlock of opinions on knowledge might be exemplified by Aristotle’s and Descartes’s understanding of it. Aristotle (384-322 BC) as the founder of empiricism argued that all knowledge is based on experience and, as such (on account of the fallibility of the senses), only probable [9]. Descartes believed, conversely, that (certain) knowledge can be obtained from innate ideas through inference [3].

Albert Einstein said that knowledge is experience, having in mind philosophical knowledge. Karl Popper defined knowledge, within scientific framework, as a set of empirically or logically reasoned arguments, which can be subjected to criticism and falsification.

Classically, knowledge is considered in connection with data and information, from which it is formed, and wisdom that arises from the accumulation of knowledge on a given subject. Such approach can be represented graphically in the form of the epistemological pyramid, as shown in Figure 1. 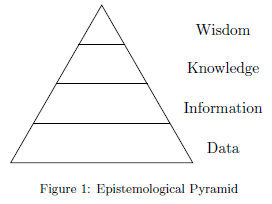 Davenport & Prusak see knowledge as a developing combination of experience, values, contextual information and expert insight that provides a framework for assessing and assimilating new experiences and information. In their work, they also state that knowledge, in order for it to have any value, must contain human context, culture, experience and interpretation [2].

Knowledge can be viewed within knowledge continuum consisting of many dimensions. In [7] and [6] the authors describe two types of knowledge: tacit and explicit. Tacit knowledge is known only to its holder as intuition and cannot be directly expressed by data or knowledge representation methods. Explicit knowledge, on the other hand, is structured and can be expressed directly by knowledge representation structures. Nowadays it is believed that knowledge does not exist in pure states (as absolutely tacit or perfectly explicit knowledge) but is a mixture of the two. Consequently, knowledge is specified within continuous knowledge dimension, boundaries of which represent purely explicit and absolutely tacit knowledge. Alavi & Leidner distinguish individual and social knowledge as two categories, which can be viewed as ends of an additional dimension [1]. Yet another dimension of knowledge continuum can be constructed with procedural and descriptive knowledge on its edges.

Multidimensional knowledge continuum can be presented visually as shown in Figure 2 (4 dimensions reduced to fit into 2 dimensions on paper). Further dimensions can be created and they may contribute to more accurate depiction of knowledge. 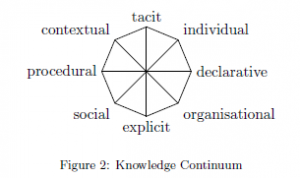 Representation stands for a relation between two spheres, one of which is designed to replace the other. The former is usually better defined, more direct or easier to access than the latter.

Knowledge representation is a field dealing with using formally defined symbols to represent a set of facts or conclusions which constitutes the knowledge of a given individual.

There are two major issues in knowledge representation:
1. which knowledge to represent?
2. how to represent it, so that computer systems can operate on it?

Knowledge representation methods can be divided into two groups [5]:
1. Symbolic approach – characterised by well-defined relations between all entities and symbols used in a given knowledge representation language and the fact that algorithms manipulating knowledge explicitly use those relations;
2. Soft approach – in this approach only inputs and outputs have formal relations with modelled entities. Is it often impossible to establish relations between symbols and represented elements. Decisions are based on statistics and not on well-defined relations.

Semantic network is a structure designed to represent knowledge as a set of interconnected vertices and arcs. Hence, semantic network constitutes a graph. Hartley & Barnden state that semantic networks have three common features [4]:
1. The way of perceiving knowledge as a set of concepts (physical objects or abstract notions) and relations between them;
2. The graphic notation, where concepts are symbolised as nodes and directed edges represent relations;
3. Computer representation, which allows operations similar to those conducted on databases and methods of inference common in artificial intelligence. Many semantic networks are implemented using Lisp or Prolog.
Despite these common features, semantic networks are heterogeneous, using different approaches to solve many issues, such as inference techniques or approach to inheritance.

As mentioned above, semantic networks represent knowledge as a graph. Moreover, this graph is usually directed (digraph). An example of such graph or semantic network is presented in Figure 3. 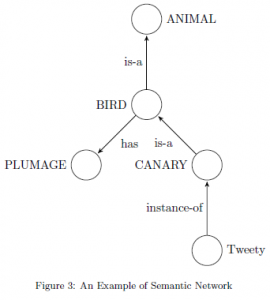 Sowa lists six types of semantic networks [8]:
1. Definitional networks – emphasise the subtype or is-a relation between a concept type and a newly defined subtype. The resulting network is a taxonomy. Since definitions are true \emph{ex definitione}, the information in these networks is often assumed to be necessarily true;
2. Assertional networks – are designed to assert propositions. The information in these is only contingently true;
3. Implicational networks – use implication as the main relation;
4. Executable networks – include mechanisms, which can perform inference;
5. Learning networks – include mechanisms (sometimes external) allowing changes to be made to the network itself and, consequently, allowing new information to enter the network;
6. Hybrid networks – combine at least two of the above.

As stated above, there are two approaches to knowledge representation: symbolic and soft. An obvious difference between the two rises from risk management perspective. Methods within soft approach are effectively black boxes, properties of which can be explored only by using statistics. Symbolic approach has a valuable asset in this field, because methods within it can be studied carefully and their characteristics can be explained in a deterministic manner. This, in turn, is great when companies want to be certain that the negative scenario is not just improbable but impossible.

Nonetheless, the soft approach has gained a lot of popularity over the last 15 years and is now bestriding the knowledge representation. Semantic networks are rarely used in business solutions and there is a exiguousness of research in the field. Neural networks, on the other hand, are used frequently in almost every business solution.

Why is it that the approach which yields better understanding and better control of company processes fell into desuetude? The answer lies perhaps in the myopic economy.

Companies are shifting their focus towards short-term results for many years now. Therefore they are not willing to invest in better methods, which would take longer to fully develop. This might be the main cause for the popularity of neural networks, which required less research (money & time) to be operational.

The shortsightedness of companies means that their approach to knowledge might be suboptimal and therefore generating, possibly Bunyanesque, opportunity costs compared to the potential effect of symbolic methods in the long term. The real question is: what are the overall costs for societies caused by the myopic economy?